Menu
Wraparound care from 8am - 5:30pm Preschool onsite Visits to our school are always welcome from prospective parents. Please phone the school office to arrange an appointment - 01507 343240. Read our most recent Ofsted report - Oct 2018 to see why you should choose our school.
Log in

Today we have spoken to the children about 'Stranger Danger' and have given some advice on how to keep themselves safe. The PowerPoint we used can be found in the link below.
To start Class 1's topic about mini beasts we went on a mini beast hunt in God's acre in the churchyard. We had a great time hunting and found millipede's, beetles, ants, spiders and woodlice. We even had a visit from Marigold the lamb!
Class 1 and 2 visited Pink Pig Farm last Friday. We had a wonderful day. We found about different crops and how wheat is made into flour. We then used the flour to made our own bread rolls to take take. They smelled delicious when they had been baked. We looked at the farm animals and we even managed to get some time for free play. We had a fantastic day!
Guess who visited Class 1 and 2 on Friday morning? The Easter bunny! We had so much find looking for and finding the Easter eggs he had left. They tasted good too!

Comic Relief...well done you raised over £130! Thank you for all your donations.

Class 1 and 2 went to Lincoln Castle

When class 2 came to read their stories to class 1

Today Emma from the Dog's Trust visited us. We had a great time learning about how to look after dogs and how to keep safe around them.

To start our fairy tales topic we watched the Peter Pan pantomime. We really enjoyed it and joined in with booing for the baddies and cheering for the goodies! We listened to the story 'The Enormous turnip' and found out about root vegetables. We planted some turnip seeds and they have already started to sprout. The children also asked what we could use the vegetables for and someone suggested soup so this week we made some! Some of us tried it and although it may have smelt disgusting it tasted delicious!

The first two weeks of January...

We read 'Bear Snores On' by Karma Wilson. We had lots of fun after reading the story. We role played using masks, we made bear pictures, clay hedgehogs and a cave for the animals to hibernate in! We had a busy week!

We had lots of fun when JB visited Class 1 and 2 today!

Some of the learning taking place in Class 1

When JB the dog visited school

On Wednesday afternoon we had a visit from Tony who showed us some reptiles and birds. He talked to us about how these animals were related to dinosaurs. We found out lots of information and really enjoyed his talk. Some of us were even brave enough to hold a tarantula!

Class 1 have settled in beautifully

Class 4 have had a great afternoon learning all about the roll of the police and how they can support their community - we are now a mini police school! There will be 3 Y5 and 3 Y6 mini police officers who will be elected on Friday 28th. In order to be elected class 4 need to write a 1minute speech explaining what they think a good mini police officer should do.
Last Monday Grace's guinea pigs Wiggles and Biscuit visited the Wrens. We found out what they liked to eat and how Grace looks after them. We had cuddles and even tried to have a guinea pig race but they were too interested in eating the grass!
On Thursday 29th June the Wren's went to visit Chambers Farm Wood in Wragby. We had a wonderful day and the children behaved superbly. In teams we made dens, which then we turned into a miniature village. We had a camp fire and cooked popcorn, went on a walk deep into the woods and found out about how you could survive without any provisions! A great day was had by all.

Wren's found out about honey and then made flapjack using honey- yum!

Continuous provision in the Wren's

A visit from Dylan's lambs

The soon to be Year 3's testing out being Robin's!

Today we were lucky enough to have a five piece orchestra come and play for us. We had a great time listening, singing and finding out about their music and their instruments. The Wren's class were very lucky and took part in a workshop afterwards. 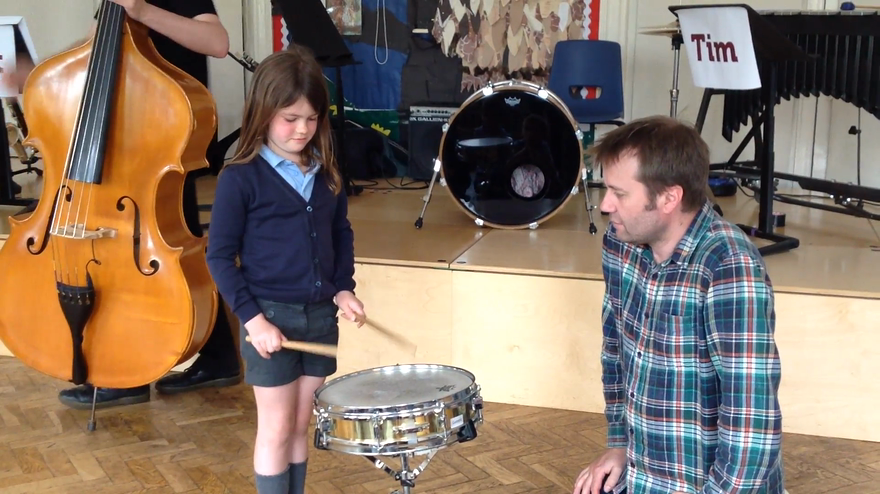 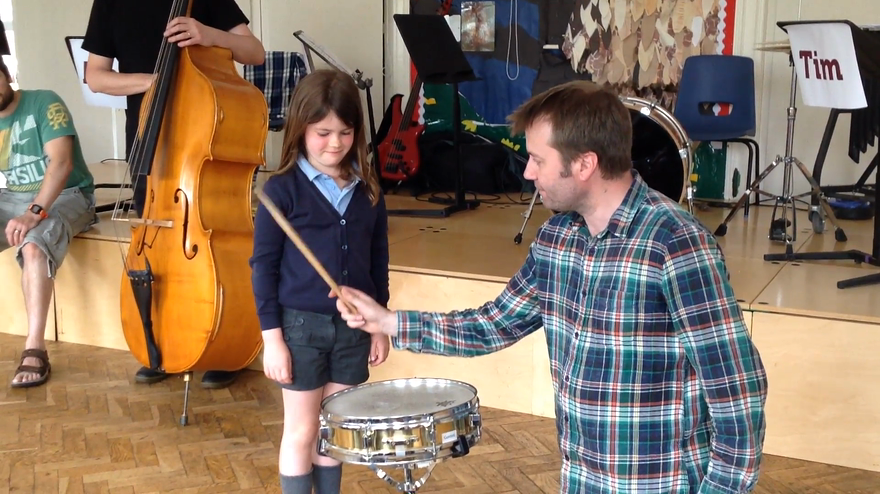 The Donington on Bain School Choir on the way to their first performance!

This week has been a busy one for the Swallows as we have done bike ability, had people come in from the village to tell us what it was like when they were kids and made our time machines. In bike ability we learnt a lot about junctions, the things we did were:

Stopping a journey, starting a journey, right in, right out, left in, left out, controlling position, sharing position, stopping u turn and u turn. We were taught by Gary and Pete. We have also made time machines, the time machines are to do with our topic time travelling.When the people came in for the coffee morning they brought pictures and books and they told us lots of interesting things the layout of the school is a lot different to when they were at school. There used to be a canteen in the Wrens playground and behind that was a garden where they grew the food for the dinners. The chapel use to be a classroom and the head teacher was Mr Ellis. It was really interesting to learn about

We have had a very busy start to the term, last week we had an election that determined the school council. The people who were elected in Swallows class were Polly, Toby, Lily-Mae and Elsie. This week we had our first meeting Toby is the Secretary and Polly is the Chairman.Today(22/09/2017) some year 6s took their 11+ test so fingers crossed, I’m sure they did amazing.  Last Tuesday we had a dress up from the past day, some people dressed up as an evacuee, David Beckham at a presentation, a chimney sweep, a Viking, a Victorian and themselves from the past. We also discovered a guided reading website called read theory that we can do at home as well as at school.
Written by Polly Spink

Hummingbirds went for their first walk around the village to collect all things Autumn. We took Mrs Wright with us, Mrs Smith and Ellie came too.

We found lots of conkers, acorns and lovely, Autumn coloured leaves. We collected everything in our carrier bags and took them back to school to put on our nature table and to draw and make into 'flower arrangements' using oasis as a base.

Whilst we were on our walk we went across to the Church and had a look around in the Churchyard. We also had a peek inside the church but because we had muddy boots on we decided to go back another day to have a really good look inside.

Ellie climbed a tree and got stuck!

Some children were able to find the letters 'a' and 's' on a road sign!

We had a lovely time and can't wait to go again.

Mr Bent from JB Sport has started a 6 week course with the Hummingbirds Class doing Balanceability. The pictures below show what an amazing opportunity this has given our children to learn new skills and also it was immensely good fun, enjoyed by us all.

Our topic this Term is 'Do you want to the Friends?'

This is a carefully chosen topic to help the children settle into school life and to make friends and value and respect the friendships that they make.

Outdoor Learning Week, July 2017 - Thank you Mrs Smith for all your hard work (it was a genuine mistake and Mrs Anyan's fault that these didn't get put on sooner!)